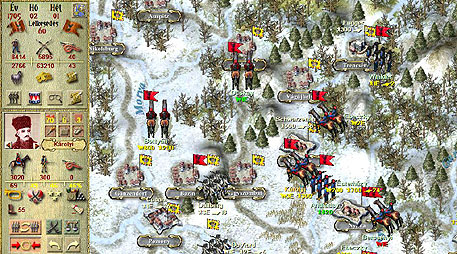 Name of the game
Pro Libertate! / For Liberty!

Description of the game
A wargame that offered players a chance to relive the heyday of both the Rákóczi War of Independence against Austria and the American Revolution. Seeing the game land on our desks recently gave us a great excuse to revisit the glories of the Age of Enlightenment when war was an affair for brightly uniformed infantry, daring cavalry charges and thundering cannonades. There are two full campaigns for each war and a number of smaller campaigns that focus on just a few years of action. A reasonably thorough, if not overly friendly, tutorial will get players up to speed on the basics in short order.

The main point in each campaign is to accumulate victory points by capturing towns owned by your enemy. The towns serve as sources of income in the form of men, material and morale. Owning is not only the goal but also the means to achieving that goal. Taking towns also grants the player influence points which can be spent for political or material goals. You might use it to buy new units for your armies, or you might use it to spread propaganda to reduce enemy morale.

At the end of the campaign, the side with the most points wins. Discounting the inclusion of specific strategic objectives driven by political or geographical considerations, it’s a nice way to determine a player’s overall success or failure.

While moving armies overland and planning city sieges is fun, the most obvious drama in the game comes from the tactical battles. When two armies meet up, you’re taken to a random (but geographically appropriate) map where you’ll fight things out tactically. For Liberty! renders the tactical battles with all the elements wargamers expect: formation and facing controls, movement points, morale models, terrain and weather modifiers, ammo and supply levels, etc. Using the same hex-format of the strategic map, players will position and move their forces in hopes of forcing the enemy to retreat from the field.