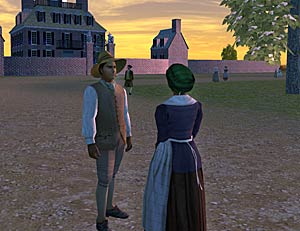 Name of the game
Betwixt

Description of the game
Betwixt Folly and Fate, an immersive 3-D role playing game that places players in 1774 Williamsburg as one of four characters:
Chloe, an enslaved house servant Henry, a free black carpenter Mary, a midwife’s assistant George, a young gentleman
In each role, players face the challenges of daily life in early America while learning about the social classes and customs of the time. For example, Henry, a free black carpenter, must find enough work as a journeyman to pay his mother’s rent. As Henry seeks carpentry work and other tasks that come his way, the player learns about facets of ordinary eighteenth-century life as well as the opportunities and constraints facing a free black tradesman in 1774.

As players pursue their characters’ goals, they explore a large portion of eighteenth-century Williamsburg, Virginia, roaming the streets and meeting people in shops, taverns, the Courthouse, and private homes. The town is populated with dozens of characters, including George Washington, Thomas Jefferson, and Patrick Henry. Players may also bargain for goods with shopkeepers and try their hand at several colonial games.

Type of the game
RPG